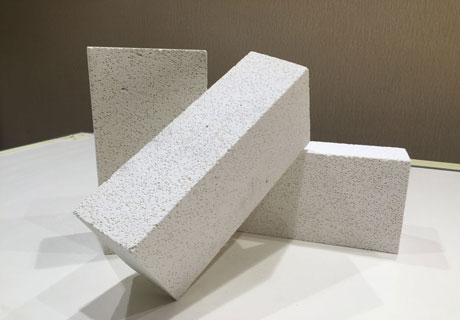 On the one hand, mullite brick is usually applied in electronics and optimal industries. And on the other hand, mullite brick is mainly used in high temperature industry, such as in the roof of hot blast stove, blast furnace stack, furnace bottom, glass furnace regenerator, ceramic sintering kiln, oil cracking system dead angle lining and so on.

According to synthetic methods, they are two types of mullite bricks.

Sintered mullite bricks are made from high alumina clinker, with a small amount of clay or raw bauxite as the binding agent through molding and firing.

The mullite brick production process requires high purity of raw materials, a small amount of impurities will reduce mullite content. The most harmful thing is R2O, which leads to decomposition of mullite at high temperature. Fe2O3 can delay the formation process of mullite. When a small amount of TiO2 exists, some Ti ions can enter the mullite crystal lattice and form a limit solid solution, thus promoting mullite formation and crystal growth. When the content of TiO2 is too much, it acts as a flux.

The sintering synthesis of mullite brick mainly depends on the solid phase reaction between Al2O3 and SiO2. The increase of the subdivision of raw materials will accelerate the process of solid phase reaction. Especially, the particles smaller than 8um play a great role in the formation and sintering of mullite. According to some data, the sintering temperature of synthetic mullite depends on the proportion of 4um particulates. When the particle size is below 4um, the material density is the highest.

The electric cast mullite brick is made of high alumina, industrial alumina and refractory clay as raw materials, adding charcoal or coke fine-grained as reducing agent. After forming, electric cast mullite brick is formed by reduction electrofusion method. The crystallization of fused mullite is larger than that of sintered mullite, and its thermal shock resistance is better than that of sintered products.