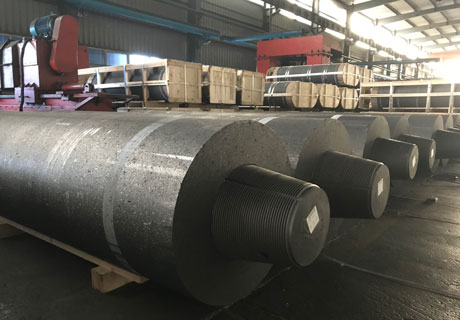 Graphite electrodes for sale are used to conduct electricity in other mineral heat furnaces that smelt materials such as yellow phosphorus, industrial silicon and abrasives.

Graphite electrodes for sale is made though the process of calcining, batching, kneading, pressing, baking, graphitizing and machining.

The professional graphite electrodes are made mainly by high speed machine tool, the stability of the machine tool is good, the three axis movement should also be stable and not vibrant, and the rotation precision of the spindle should be as good as possible.

Graphite for industrial use is hard and brittle, and the tool wear is severe in CNC machining. It is generally recommended to use carbide or diamond coated tool. Graphite can be cut directly on the workpiece when in roughing machining. While in precision machining, in order to avoid the occurrence of end breakage and fragmentation, it is often adopted the way of light cutting processing. Generally speaking, graphite rarely breaks down when its cutting depth is less than 0.2mm, and good side wall surface quality can be obtained. It has larger dust in the graphite electrode CNC manufacturing processing which can invade the guide bar and the spindle of machine, requiring the stone mill machine tools have corresponding graphite dust processing equipment. The sealing of the machine tools should be good, because the graphite is poisonous.

A graphite electrodes manufacturer believes that periodicity will continue, and that in the next one or two years, the high graphite electrodes price will be very beneficial to suppliers, and the next five or six years will return to a period of low profit. “The margin of the global graphite electrodes are still around 200 thousand tons, but because of the shortage of coke and the lack of investment in the factory in recent years, it means that it will be reached at the present stage,” he said.